Brosella Folk & Jazz festival is one of the highlights of summer. This year, I missed the folk (so I thought) by going there on Sunday to check out some jazz. The evening turned out to be quite "folky".

After hearing the latter half of Chris Joris' gig, I went to see Karl Seglem's group. Karl is a Norwegian tenor saxophonist and composer who combines folk music traditions and world beat with jazz expression. I had never heard of him before Brosella festival, so I was curious to hear the gig. Norwegian groups are usually very good, and Seglem was no exception. The band understood how to use space in music, to make songs breathe naturally. Great concert. 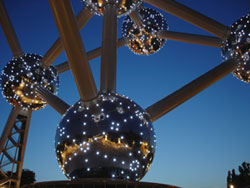 Organisers had set up the smaller stage further down the hill. This was a big improvement as it allowed people to move more easily between the two stages and food/drink area. Philip Catherine was playing on main stage, but after Karl Seglem's concert I didn't have the energy to listen to his trio for more than 15 minutes. He plays anyway quite often in Brussels (I hope).

I really like the setting and atmosphere of Brosella Folk & Jazz. Looking forward to next year's festival!