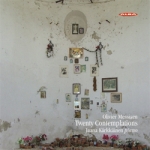 Next year, 2008, is the 100th anniversary of the birth of Olivier Messiaen, a French composer, organist, and ornithologist. He must have been one of the most original composers of the 20th century: by mixing his own modes of limited transposition, birdsong transcriptions, exotic rhythms, religious ideas, and colourful instrumentation and orchestration (see ondes Martenot, for example), he created some truly original and inspiring music.

Messiaen’s monumental piano work, Vingt regards sur l'enfant-Jésus (“Twenty Contemplations on the infant Jesus”), has been recorded many times before (Hakon Austbo, Yvonne Loriod (the composer’s wife) and Pierre-Laurent Aimard, to name just a few). I’ve heard Austbo’s and Aimard’s versions, and now there’s a new live recording of that work from Alba Records, performed by pianist Jaana Kärkkäinen. I’m promoting the CD here not only because she’s my sister ;-) but also because it’s a very good recording that captures the excitement and atmosphere of a live performance!

Helsingin Sanomat, the biggest subscription newspaper in the Nordic countries, selected that CD as one of the best recordings of 2007 (worldwide). You can buy the CD here.